Choosing The Right Paint Booth For You

As a start-up shop, sometimes choosing the right paint booth can be a bit tricky.

The term “paint booth” is very broad and can mean anything from a basic enclosure with a fan to a high production paint booth that includes many other features and systems incorporated.

Sometimes a shop owner may be looking for a fully heated, high production type of paint booth off the bat where a start-up shop may want to start with a basic non-heated booth and have their paint booth grow with them as their rate of production increases. Depending on the shop owners plans, one type of booth may be a better choice than another.

In this blog post, we will be breaking down the basic types of paint booths and their advantages and disadvantages in terms of performance, cost, and most importantly, their flexibility in the future.

Any start up shop that is looking to install a basic non-heated paint booth should carefully consider what is right for them now and what will be right for the future. First we will define the four main types of booths we see in the automotive market and their relative pros and cons in terms of airflow and performance. Afterwards we will look at adding heat (air makeup units) to each and see how that may affect the buyer’s choice.

Definitions of Each Type of Paint Booth, Advantages, and Disadvantages

A crossdraft paint booth flows air directly across the vehicle or the object being painted. Crossdrafts are the most popular paint booth found in the automotive and truck industry since they are the most economic answer to meeting codes for anyone painting in their facility. The incoming air is drawn directly through the main doors or through filtered columns in the front corners of the paint booth workspace. The exhaust is achieved through the back wall or another set of columns in the rear. 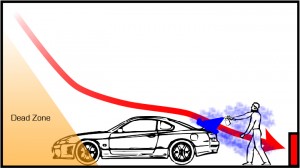 Semi-downdraft paint booths operate much like a crossdraft since the exhaust is still achieved via the rear of the paint booth workspace, however the incoming air is now introduced to the workspace through small section in the ceiling located at the front of the paint booth.

This creates a draft pattern that is directed at a diagonal from the filtered area of the ceiling to the exhaust point at the rear of the paint booth.

Advantages of Side Draft

Disadvantages of Side Draft

A downdraft paint booth produces a draft pattern that is straight down from ceiling to floor. Downdrafts may need concrete pits or may be raised on steel basements with drive-up ramps.

Either option represents a significant cost that must be weighed by the buyer.

A major consideration when buying a basic non-heated paint booth is the addition of a heated air makeup unit later on.

A custom shop may never need heat and production upgrades but if volume ever becomes part of a shop’s business model, it is imperative that they add heat to their paint booth in order to stretch the overall capability of their existing facility.

If a start-up shop purchased a basic non-heated paint booth and has done a good job at marketing themselves and developing repeat business, they could find themselves in this position pretty quickly. Costs and challenges in heating the four different types of paint booths can vary.

Here is a quick breakdown on the addition of heat as it relates to the four types of paint booth covered above.

Heat recycling is also very important when adding heat to a paint booth since it can save thousands per year. The ability of including heat recycle is also noted on each type.

The most economic paint booth available is typically the most expensive to retrofit with heat in the future. The buyer must keep that in mind when the original purchase is made.

If production is the goal for the buyer, heat is definitely in the picture either now or in the future. A crossdraft paint booth delivers air through the doors or through columns in the front of the booth. Heat would have to be supplied through either of these places in order to work.

Adding heat to columns can take some extra ducting and creative customization by the installer which adds to labor and material costs above and beyond the cost of the air makeup unit and controls that may already cost $10,000 or more. If the crossdraft paint booth breathes through filtered main doors, there is no way to add heat to the doors without blocking the way into the booth so the doors must be sealed and an upper plenum must be constructed on site by the installer.

The interior ceiling must be cut open and framed for filters thus converting the crossdraft into a semi downdraft. This becomes extremely expensive and may even throw the idea out the window until the owner can afford a new heated paint booth.

Possible in certain configurations of crossdraft but achieving it will not be cheap or easy. Most installations would not be in a position to retrofit a heat recycling air makeup unit in a cost effective manner.

Relatively easy to retrofit with heat. The upper plenum that is supplied with a semi downdraft paint booth makes heat an easy retrofit.

The paint booth air makeup unit can be stood right next to the paint booth and fed right into the top plenum. Very little on-site work or metal customization is necessary since the cabin has the plenum. Labor costs should be reasonable and the installation should be straight forward for the installer.

Heat Recycle: Most likely difficult and/or expensive since the exhaust is still at the back of the paint booth and the heater is at the front. Connecting the two would be expensive and need a lot of ductwork.

Some installers may cut a small opening into the booth wall where the heater is standing and feed some of the booth air back into the air makeup unit when the paint booth is in the bake cycle but a true 80%+ heat recycling system is generally not seen.

Easy retrofit of heat and heat recycle. A side downdraft paint booth has ducts that run along the side walls and has a full upper plenum.

Heat is also easily added and heat recycle can be possible.

Different layouts of the existing paint booth may make the addition of heat easier or more difficult but little or no modification to the existing cabin is necessary thus keeping some of the installation labor costs down.

The components that are necessary (The heater, controls, and safeties) represent the major cost of the upgrade.

Consider the challenges shown per model above and choose wisely! Always think ahead when purchasing a paint booth. Think about where you are now and more importantly WHERE YOU WANT TO BE “x” number of years from now.

It may seem like a lot to consider, but try to ignore the “lets just get going and figure it out later” feeling. Selecting the right type of paint booth and developing a well laid out floor plan will save you thousands in the future.

It’s definitely worth a day or two of creative thinking and planning ahead. Good luck out there!