If you’re looking to buy a new paint booth and have been doing some research, the question of direct driven or belt driven air mechanicals may come up. This detail has quite a discussion around it and every person you speak to seems to have a different opinion on which is better for one reason or another. In this article we will be addressing the fundamental difference between direct drive and belt driven air mechanicals. This is most commonly a discussion that occurs a the high performance paint booth level (meaning paint booths that have all-in-one style air mechanicals with integrated intake/heat/exhaust/recirculation etc.) and for the purposes of this post, we will stay in that arena.

The common mistake – First and foremost, we need to address the common title given to this topic. The use of the words “Direct Drive vs. Belt Drive” is the most common phrase when engaging in discussions regarding the two types of systems but it is actually misleading and incorrect since the real difference is that the two systems carry DIFFERENT TYPES OF FANS. Generally speaking, HOW rotation is achieved has nothing to do with the system’s performance. If rotation is occurring at the right rate, a fan will work regardless of how it’s being turned. Remember, the main difference between “direct” and “belt driven” systems is the type of fan, not the method of rotation.

The types of fans involved in the discussion – There are 3 types of fans that are used in any high performance paint booth air makeup system and we need to understand the characteristics of each before we can make a good comparison.

A forward curve centrifugal blower or “squirrel cage” is used in the supply side of many paint booths and it is also used in commercial and residential air systems. This type of fan is used almost solely in the intake or supply side of a paint booth and not in the exhaust because it is built to handle clean air. A forward curve fan could not support being laden with the paint overspray if it were used in the exhaust side of the paint booth. Eventually, the overspray would cake up enough to diminish performance, throw the fan out of balance, or even break blades off the wheel. The forward curve fan is also preferred for the air supply because it is the quietest of all fans and delivers very powerful airflow for its size and weight. Since the air on the supply side is delivered right to the paint booth workspace, the sound level produced by the intake fan is conducted right to the worker and noise level is a very important consideration when a paint booth manufacturer is trying to design a comfortable and quiet workspace. 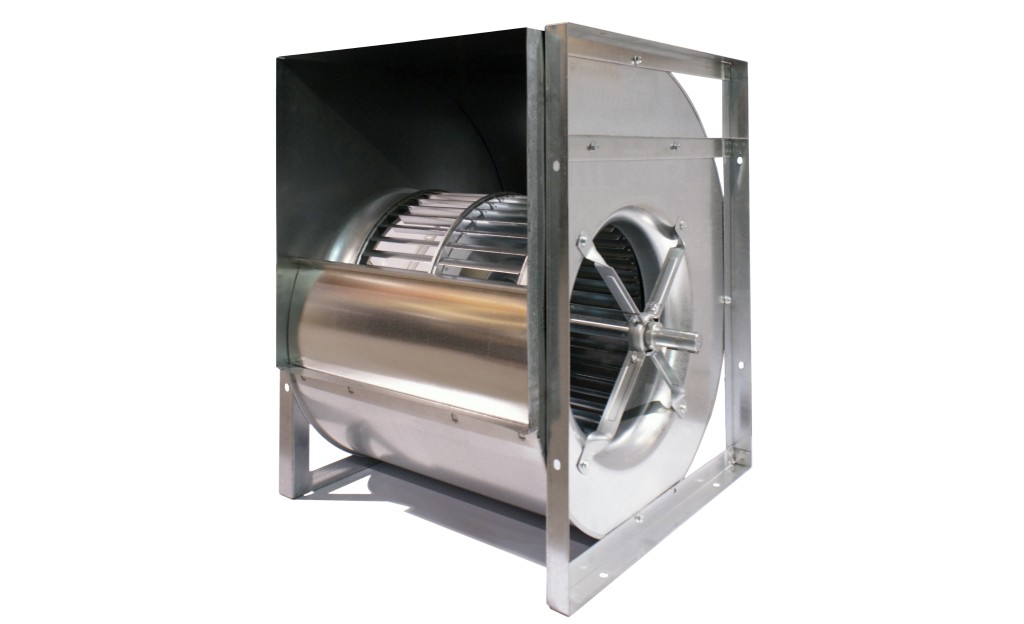 A backward inclined fan is used predominantly in the exhaust side of a paint booth because it is constructed with heavy angled blades engineered to handle the paint overspray in the air and greater static pressure due to heavily soiled filters. (Think of this like “back pressure” or how hard it is to push the air where it needs to go).

Within backward inclined fans, there are two sub-types; Dual Inlet Belt Driven Fans & Single Inlet Direct Driven Fans. Both have the same type of blade construction and can work through heavy overspray and caked filters. They vary simply in terms of where the motor is placed and how the air flow moves through them.

2a. A BELT DRIVEN DUAL INLET  fan (Shown Above) has a shaft that runs through the wheel. The shaft is accessible on the exterior of the fan housing. Because of this, the manufacturer has the flexibility to design the motor mount anywhere around the fan. The motor may be either inside or outside the main box or on either side since the shaft protrudes on either side of the fan wheel. The motor shaft gets a pulley and so does the fan shaft. They are then connected with belts in order to provide rotation. When the unit is started, air flows into the center of the wheel from both sides (hence the name “Dual Inlet”) and the air is then expelled out the mouth of the fan.

2b. A DIRECT DRIVE SINGLE INLET fan (Shown Below) has the same blade construction but has no shaft and simply has a coupling or “hub” on one side of the fan wheel that allows the motor shaft to hook directly into the fan wheel. When the unit is started, air flows into the open sideof the wheel and is then expelled out the mouth of the fan. The term “single inlet” comes from the fact that the fan can only draw from one direction because the motor and mounting plate are blocking the other side of the wheel.

In a direct drive paint booth mechanical group, manufacturer’s use single inlet, backward inclined fans on EXHAUST & INTAKE. This is due to the fact that direct drive forward curve fans of this size do not exist (or are far too expensive to consider). Other reasons manufacturers use the direct drive inclined blade fan on the intake are cost, ease of design, and less parts/material use in manufacturing since the fan needs no pulley and can generally fit in a smaller housing.

Rule of thumb, if a paint booth’s air makeup unit is being described as a “direct drive unit”, more than likely the supply side and the exhaust side will carry the exact same fan; a backward inclined, single inlet fan (also called turbine or turbo fan). If it is being called a “belt driven” unit, most often, a backward inclined dual inlet fan will be provided in the exhaust side and a forward curve centrifugal blower will be provided on the supply side.

If you understand the performance differences between backward inclined and forward curve fans, and you look at the two typical setups described above, you can now boil down the entire discussion to one solitary feature: the fan type found on the supply side of the paint booth’s air mechanicals. Backward inclined constructed fans (either direct or belt driven) are universally used on the exhaust side of any high performance paint booth regardless of the type of system. The only difference is on the supply side where a belt driven system may use a forward curve blower and a direct drive unit will use the same backward inclined fan as the exhaust side.

Now that we have broken down the direct vs. belt drive discussion to one fundamental difference in terms of the hardware, here is a short list of other relevant pros and cons to keep in mind when researching belt or direct drive paint booths. As you now know, the type of drive really means nothing. But for simplicity we will still refer to the two systems as they are referred to in the real world; “Direct Drive” and “Belt Drive”.

As long as the fans are rated for the same CFM (Cubic Feet of air moved per Minute), the paint booth air makeup group will move the exact same amount of air whether it is direct drive or belt driven. What is most important to know is the fans’ overall CFM ratings and the horsepower of the motors. This all must be compared at the same static pressure to make a true comparison but most popular spray booth brands already do that math for you and their numbers are calculated relative to that.

Both systems will handle the same static pressure on the exhaust side of the paint booth. However, the fact that a direct drive paint booth uses an inclined blade fan on the intake gives it the added power to fight through very dirty intake and ceiling filters. Forward curve blowers, although quieter, lose efficiency once there is too much static pressure present (when filters are very dirty). Typically the intake side of a paint booth is clean and should never get dirty enough to affect the performance of the fan, but it can happen, and a backward inclined blade fan will push through dirty filters better than a forward curve blower will.

Ceiling filters should be changed regularly and neglecting your spray booth filters this much can have serious effects on many other things, but for producing more airflow through dirty intake filters, the direct drive gets the nod.

The design of the single inlet direct drive fan allows it to take up less space than a comparable belt drive unit moving the same CFM. Belt driven dual inlet fans must breath from both sides which means that the mechanical group’s fan boxes must be larger to leave breathing space on both sides of the fan. Shop space is very precious and smaller is a plus.

In terms of ease of service and the overall life of the mechanicals on your paint booth, belt drive units tend to offer more flexibility and protection of the key components. In a direct drive unit, the motor shaft is hooked directly to the fan wheel. If the fan wheel should ever become overloaded with overspray or come out of balance for any reason, it can cause a lot of harm to the motor and there’s a possibility you would have to replce both components, neither of which are cheap. In a belt driven system, the belt would absorb any vibration (large or small) and the motor would not be affected. Additionally, serviceability and access to the fan wheel and motor is much easier on a belt drive unit if the user ever needed service on the booth. Motor and fan are easily accessed while still mounted and  the components are separate. The fan can stay in its housing and can stay mounted while someone inspects or services it. In a direct drive unit, a lot of times the motor and fan both have to be unbolted and completely removed from the housing in order to work on the parts in any way. This can lead to someone dropping the fan or motor and damaging either. At the very least this will lead to higher service bills as most motor/fan combos on direct drive units require at least two men to perform the job.

Additionally, direct drive fan and motor combos are made specifically for each other. If the manufacturer uses a motor or a fan with a non-standard shaft or hub dimension, the user is stuck with buying those two parts from the manufacturer for the life of the equipment. Belt driven units can be fit with any closely sized motor or fan allowing the user the flexibility to find those parts anywhere if they are in an emergency or if they can find replacements for a lower price.

Already covered above. Belt drive units generally use forward curve centrifugal blowers on the intake which makes for a much quieter environment for the worker.Direct drive units use a backward incline fan on the intake and it is notably louder in the workspace.

We hope that this post helped some of you doing research on your next paint booth or finishing system. Weigh the pros and cons and see what makes the most sense to you. Good luck out there!